Yesterday, I watched from across the internet as a woman I’ve never met in real life (though, we have shared tweets on topics ranging from Marilynne Robinson to supplementing with formula to racing half marathons) went after an ambitious goal. Just over a year after having a baby girl, Sarah trained for and then hit the Olympic Trials Marathon standard. She’d just missed the standard right before getting pregnant. A year later, she said she was barely running 15 miles a week.

Never in my wildest, most competitive running days of dreams has an Olympic Trials Marathon standard been on my radar. But.

When I read about Sarah’s finish time, which I did while kissing Thea on the cheek and trying to sneak a glance at my phone before she put it in her mouth, I cried. I thought about her sweet girl, just a few months older than mine, about how someday when her daughter is older, she’ll understand that her mom qualified for the Olympic Trials in the marathon. 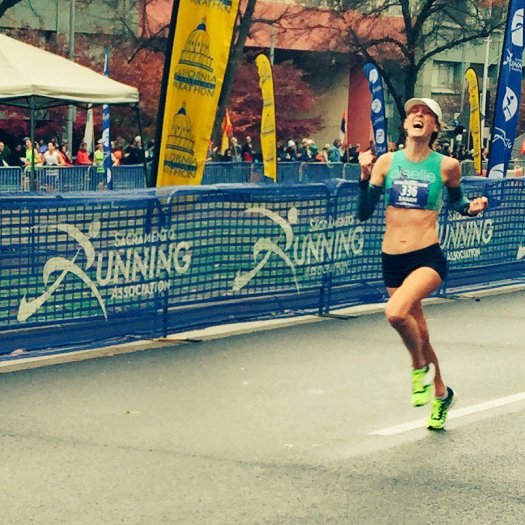 Later in the day, I saw a picture of Sarah’s face at the moment she realized she’d hit the standard and I cried again. The picture is so much bigger than running. It’s a visual that speaks viscerally to the pure joy from conquering a daunting, scary goal that at times must have seemed crazy, impossible, or futile.

I’m sitting here at the kitchen counter writing for the first time in awhile. The essay I’d started back in October is a mess. (In part because I tried to get feedback on it before it was ready for that.) I’m out of writing shape because during the past several weeks, I’ve run or cleaned or done Christmas things or end-of-the-season coaching paperwork when Thea napped, and at the end of each day the essay feels a little less urgent and it’s a little more tempting to move it to my mental trash folder. Didn’t work out, move on, no further action required.

It is so easy to make excuses not to write. Or chase any big, scary dream. Writing is hard. It’s messy. Some essays or chapters or entire book-length drafts do get thrown out, and some that feel ready and fully formed will never be published. But, I am going to put myself out there, on the starting line in the rain. I owe that to Thea.

She is my light and my joy.

(I think credit for the photo above goes to Sarah Lesko, Oiselle’s Head of Corporate Development)